A Litany for the Mass Dead: Reflections on Memorial Day and the Tulsa Race Massacre 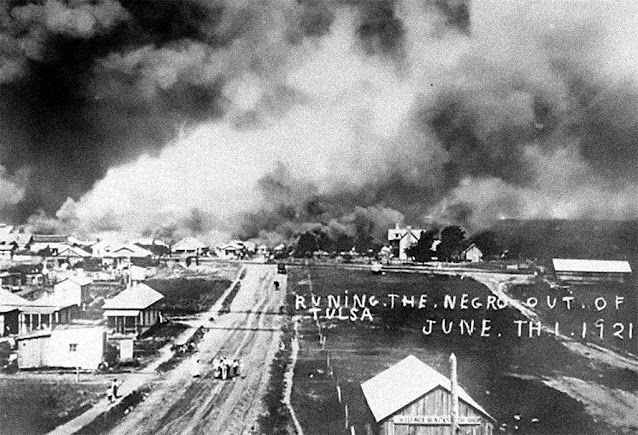 The first person to die for America was a black man.

Crispus Attucks, an escaped slave, was shot and killed by the British during the Boston Massacre of 1770. He was the first to die for what would become the war for American independence.

The liberty won then would not be granted to his race for nearly another hundred years. And then only after another brutal and horrific war.

There have been disputes as to where the very first Memorial day was observed, but it now seems that the very first was held in 1865 in Charleston, South Carolina. Where newly freed slaves and veterans of an all black Union battalion decorated the graves of the Northern soldiers who had died in battle. A parade was held where children sang “John Brown’s Body.” This was all largely forgotten, which is to say ignored, by history until recently.

56 years after that first Memorial day, in a section of Tulsa, Oklahoma called Greenwood, veterans of the first world war, some wearing their uniforms in honor of the holiday, prepared themselves once again for battle.

But tension had already been boiling for some time. The past half century had seen the rise and fall of reconstruction, the advent of segregation and Jim Crow laws, an incredible amount of police brutality and lynchings.

As W.E.B. DuBois wrote, in a short and essential essay, that when black soldiers were drafted to fight for the notions of liberty and justice abroad, to fight for America, that:

For the America that represents and gloats in lynching, disfranchisement, caste, brutality and devilish insult—for this, in the hateful upturning and mixing of things, we were forced by vindictive fate to fight also.

But today we return! We return from the slavery of uniform which the world’s madness demanded us to don to the freedom of civil garb. We stand again to look America squarely in the face and call a spade a spade. We sing: This country of ours, despite all its better souls have done and dreamed, is yet a shameful land.

Black communities across the country began to assert themselves. Demanding to be treated as human beings and as true citizens of this nation that was built by their enslaved labor.

The media at the time called it a socialist plot. A lot of white people felt a lot of panic.

During what's known as the "Red Summer" of 1919, there were 38 separate “race riots” in cities all over the nation. All of which with white people instigating and escalating violence, often for little or no cause. This was an excuse to destroy and loot black property, set fires to homes, and take out all of their “economic resentment” on innocent black flesh. That same year there were at least 43 lynchings of African Americans and another 8 burned at the stake. The following year would see another 53 African Americans lynched. Often for the (often unfounded) accusation of rape of a white woman.

Which brings us back to Greenwood in Tulsa. Memorial day, 1921.

A 17 year old white girl screams in an elevator. No one knows why. But a black teenager is arrested. The paper calls for a lynching. A thousand or more white folk show up at the courthouse to make it so.

There’s a bit of ritual to it. Police hold the suspect and a mob comes to demand that the suspect be released to them. Sometimes the police actually try to resist the mob but become outnumbered. Sometimes the police just try to put on a show of resisting so they can file it as such in their police reports. This ritual was done repeatedly throughout the south after the Civil War. It had happened twice just the year before in Tulsa. After one of the lynchings, the Tulsa police chief acknowledged that his men had not tried to stop the mob and added, “in my honest opinion the lynching of [the suspect] will prove of real benefit to Tulsa and vicinity.”

This is why on Memorial day, when word spread around Greenwood about what was happening, 25 veterans of a recent war, many in uniform, took up their guns and went to the courthouse. If the police would not stop the lynching, they would. The sheriff sent them away, but the mob grew more wild. So they came back, 75 this time. Armed. Trying to protect the life of a scared kid.

A white man reached for one of their guns. A scuffle. A shot. Then all of Hell was released.

The following 48 hours is now being recognized as one of the worst acts of racial violence in our nation’s history. Which, if you know any of our history, is really saying something. I ride my bike to work and pass unmarked mass graves to arrive in a neighborhood burned down to its foundations by machine gun fire and turpentine jars dropped from airplanes. The number of dead is still unknown. No one ever faced consequences for the destruction. Reparations have still not been made. The city of Tulsa covered up and ignored what happened for 50 years. And even now on the 100th anniversary of the massacre, the city struggles with how to respond and the state makes it illegal to even give context to these events.

100 Memorial days. 100 anniversaries of a day so terrible that the survivors didn’t speak of it in fear of reigniting the wrath upon them. 100 more years of veterans fighting and dying for a country that refuses to even tell their history. That still insists it is their history and not our history. As if it is not us who did this to our own countrymen. Our own family in Christ.

And we must see that this purposeful ignorance of our own past, our insistence that the world is just as we say it is, hurts us. As James Baldwin said, this creates a world in which white people are, “in effect, still trapped in a history which they do not understand; and until they understand it, they cannot be released from it.”

I know what the world has done to my brother and how narrowly he has survived it. And I know, which is much worse, and this is the crime of which I accuse my country and my countrymen, and for which neither I nor time nor history will ever forgive them, that they have destroyed and are destroying hundreds of thousands of lives and do not know it and do not want to know it..it is not permissible that the authors of devastation should also be innocent. It is the innocence which constitutes the crime.

Today is Memorial day. We honor those who have fought and died for this nation. But what is America, really? Just a snazzy flag and a love of fried foods? Who does this country belong to? Who has built it and fought for it and struggled and fought to force America to live up to her promise of liberty and equality?

If we do not fight to ensure freedom for all, justice for all, then what are we fighting for?

If we do not live up to the values that we sent our loved ones to die for, our parades and ribbons and patriotic songs are all hollow and meaningless.

Today I invite you to truly remember our nation’s dead. Reflect on our martyrs. Say their names. Repent and grieve and give gratitude. Acknowledge the horrors that paved our present.

Let us honor the dead by picking up where they left off in the long, unending fight to bend the arc of history towards justice.