The Rich Lady and the Poodle: A Parable 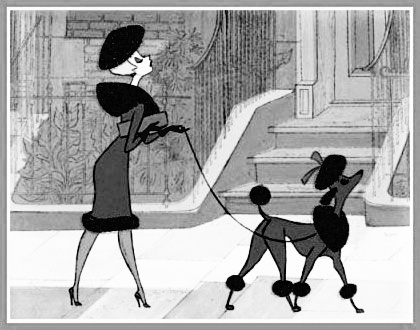 “Because no one ever says what they really mean to say when there's so much at stake." - David Bazan

On my days off from work, I like to take an early morning walk to the park and meditate. But before you start thinking of me as some shiny happy spiritual guru, let me confess two facts:
1. This is almost literally the only healthy thing I do.
2. I am still not that great at it. This morning as I meditated the 1950s doo-wop song “My Boyfriend’s Back” was in my head the whole time.

And all that’s beside the point anyway. I am just setting a scene.

Because I was meditating and finally had a brief moment where my mind actually felt clear and I was truly being present with my feelings, I opened my eyes and noticed a clearly wealthy woman walking her poodle.
She was like some sort of Disney caricature of rich sophisticated snobbery. Silver hair, nose up, immaculate but formal and kind of rigid clothes, perfect posture. Her French poodle perfectly coiffed with its little poofy balls of fur on its feet and ears.
There was this sort of regal perfection to the two of them. This quiet dignity where everything is expressed with just a raised eyebrow. A world in control. That is, until the poodle spotted a squirrel.

Training a dog is, in essence, simply teaching it to suppress its nature. This is an essential part of our living arrangement with them. We can’t have the Corgis peeing and pooping on the Pashmina rug, after all.

And this is a good thing. Living with wolves is a bad idea. Dancing with wolves seems like a good time, but living with them would not be beneficial. And for the dog, it gets protection and food and comfort in exchange for learning to curb some of its impulses.

But as I watched that poodle fixate on that squirrel, she no longer looked like a stock footage prop for WASPish affluence, but now appearing as a dog; her face tense with the agony of desire, not aware of anything other than that squirrel and, subconsciously, the pure primal joy that would come with chasing it. Then, rather abruptly, she hears her master say, “We can’t chase that one, dearie,” followed by the sensations that accompany a gentle tug on her leash, prompting her resignation back into a state of obedience—the conditioned denial of her deeply ingrained squirrel hunting nature—and finally being led to continue walking away. I wondered to myself. Can we train and control a dog to the point where it loses its dogness, the qualities and attributes that make it a dog?

But then I looked at the woman now walking away from me and wondered what sort of squirrel hunting nature she was denying in herself. What impulses, desires, and/or emotions she may be suppressing to maintain a semblance of control and dignity and class.

And then, of course, I started thinking about myself; about all of us.

Sigmund Freud once wrote that, “It is impossible to overlook the extent to which civilization is built up upon a renunciation of instinct,” and no matter what else you may think of the guy, this seems to be accurate. In fact, the simplest (and personally most satisfying) explanation for the source of our morality is this: we need to live together in order to survive; we can’t live together if we don’t trust each other; in order to foster trust, we “train” ourselves to deny our natural but selfish instincts so we can better get along with our families and neighbors.

In other words, we can’t pee and poop on the Pashmina rug either.

And while self control is no doubt a beneficial thing, there are times when it can be harmful. We can sometimes start to lose our humanness.

For a lot of us, this is something that happens during childhood. John Lennon once said that, “Every child is an artist until he is told he is not an artist,” and indeed most every child is a drawer, a painter, a storyteller, a play actor, all at once. One of the greatest tragedies in life is when we learn that art and music is something we have to be good at instead of learning the real truth that it is simply the most wonderful way to play. We become conditioned to resist the impulse to create and play because we are supposed to be serious and productive and well-behaved.

And it goes beyond that. Our very personalities can sometimes be stifled. Neil deGrasse Tyson said, “We spend the first year of a child's life teaching it to walk and talk and the rest of its life to shut up and sit down. There's something wrong there.” Philip Larkin said something quite similar in one of my all-time favorite poems.

These ideas are reinforced with religion, sometimes with much more “training” added on top of it. One of the interesting paradoxes of faith and spirituality is that I have experienced it as both a life-giving, validating, liberating force as well as a shaming and manipulative method of control. Sometimes simultaneously. I have several friends who felt redeemed and immersed in the liberty and grace of God, while at the same time desperately trying to deny their innermost sexual nature. I also have several friends, both in Christian as well as in Buddhist and New Age communities who feel shamed and condemned because they are depressed or angry or sad or anything other than a perfectly calm enlightened soul that only thinks positive thoughts.

We inhibit ourselves—or maybe I should just say that I inhibit myself, I can’t speak for your experience—out of fear. Yes, there was a fear of the approval of a big bearded angry man in the sky for a while, but even then I did not always see God that way. No, my bigger fear was of the people around me. My fear was that if I was my true uninhibited self, no one would love me.

And that’s bad. That’s really unhealthy. But I am afraid that if I express my anger or displeasure at someone that they will finally see that I am truly petty and ugly and will rightfully decide they want nothing at all to do with me. So I deny this part of me even exists.

I do this with lots of things. My depression, my desires, my sexuality. Past girlfriends have gotten furious at me because I refused to say where I wanted to eat for my birthday. I can't confess to meditating without self-deprecating jokes. I have repeatedly denied the beautiful aspects of my nature out of a fear that someone will rub my nose in it or worse, abandon me as a hopeless cause.

And I share this with you, dear reader, because I suspect I am not alone. I suspect that you may have lost a bit of your essence as well. That squirrel hunter nature within you—that thing that gives you immense joy—has been hidden inside you. And maybe it’s time that you and I start bringing all of that out again.

Don’t get me wrong, I am not advocating that you go around acting on your every impulse regardless of your moral code, but maybe it is okay for us to really own everything inside of us, even (nay, especially) the dark and weird and embarrassing stuff, and start recognizing it as a part of who we are and the decisions that we make. Even a vegetarian can admit that bacon smells good.

And the parts of us that have unnecessarily been hindered, let’s be brave enough to let those things out. Let’s make art again. Let’s be silly and loud. Let’s be angry and sad and passionate and playful and weak and imperfect. Let us recognize that it is this, not our social status or our piety, but our ability to express ourselves authentically is what makes us truly who we are.

As I left the park this morning, pondering all of these thoughts, I came across the woman and the poodle again. This time the poodle was off her leash, in joyful pursuit of a particularly fat squirrel. And that made me feel a little joyful and hopeful myself.  A feeling only intensified when, seconds later, I noticed the woman, holding her heels in her hand, chasing after her dog barefoot, laughing giddily without a care in the world.