Why I am Not an Atheist: An Essay Where I More or Less Say Nothing 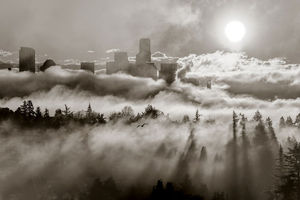 I woke up this morning before dawn. Tousled hair, bad breath, a shirt more than a few days old. And I made my way down to the Pike Place Market in Seattle. Parking is great there before 6 am (It’s actually the only time I ever recommend driving into the city, traffic here is rough).

I blurry eyed my way through all the unopened stores,
(the first Starbucks, etc.)
And found a table overlooking
Loading docks.
And here I sit.
Cold handed, typing.
Apparently
spontaneously
writing in verse.

But I like that. So I am going to go with it.

It actually fits what I am now trying to say.

As I walked through the streets this morning, occasionally being surprised by the smell of fresh baked bread, watching all of these people living out the life of a coffee commercial, I found myself smiling what our boy Kerouac would call a “beatific smile.”

And I think this is what God is.

Now I am not (entirely) going all Joan Osborne on you here, saying that God was that stranger on the bus (just trying to make his way home. No one calling on the phone. Except the Pope maybe in Rome.)

What I am saying is that the pleasure derived from sensory and physical sensation seems, at least to me, to be strong evidence for the divine.

And the fact that I have the ability to reason to myself about this and ponder the question of my existence seems to be further evidence.

I know there are some objections to this.
I have considered at least some of the evolutionary explanations for both pleasure and consciousness. And I found them to be fairly intellectually satisfying. We can discuss them at a later point if any of you are interested. This isn’t what I was planning on writing about today, so I wasn’t quite prepared. But they can be more or less oversimplified by saying that these things are beneficial for our reproductive success and survival.

But I don’t think we necessarily need to talk about those theories anyway.
Because, at least for me, I did not find any of them to be what us epistemology nerds would call outright defeaters of my belief that our pleasure and awareness emanates from some sort of divine spark.

Or in other words, the God I am coming to believe in could totally have used evolutionary biology as a tool over the course of millions of years. Or in even other words, I don't believe a god is necessary to explain these things, but these things still have the smell of God on them.

I will pause here to note that after writing that last sentence, my mind went into a spiral that lasted at least ten minutes about all the objections that I myself have to that sentence. I have a lot of reasons to not believe in any sort of theism, let alone some fancy loving designer god.

(who I now imagine to still be bearded, yes, but in that cool groomed way. And he wears vests and Warby Parkers. Designer God.)

I still have a lot of trouble writing the words “The God I am coming to believe in” without a certain amount of cringing or fearing for my mental health. And I think the word “believe” might actually still be too strong of a descriptor. But that might be splitting hairs. I think I could split hairs on this forever. I am Chidi from The Good Place. This blog will still be mostly me voicing my questions and concerns about whatever it is that God is and exploring all the ramifications if whatever God is actually isn’t.

I do think God is though. Whatever it is that God is, there is at least an is there.

I should also note here that I—at least as of now—don’t think that God is represented in any of the institutionalized religions I have studied so far.
At least not exclusively or completely. I suspect they each deserve at least partial credit, but none have the total picture.
I agree with the Apostle Paul that we are looking through a glass darkly. I agree with the writer of Isaiah that the ways of God are higher and more mysterious than our own understanding. I believe that I am an evolved, highly emotional animal with limits on my perception and reason. I know that I can’t really, fully, truly know.

Which is to say that I believe that we are all of us sensing in the dark for some answers.
And no doubt in that sensing we have created some beautiful things.
(Religious and cultural traditions, music, art, poetry, roller derby.)
But we have also created some horrible things.
(nuclear war, paper cuts, genocide, traffic).

I think some (if not most or all) of those beautiful things (both “sacred” and “secular”) have captured some aspects of the thing that I, for a lack of a better word, call God.
(but that’s just my suspicion. You are entitled to your own).

And I think that there must be some reckoning of God with all the ugly things too.
I am not presently convinced that God has any sort of personality type or agenda, and if she does if that makes her in anyway benevolent or worthy of my love and devotion. I’ll confess that the God of the Bible feels like a monster to me more often than not. But I have been told that I have misunderstood him. And maybe that’s true. I remain open to everything, convinced by nothing. But as of now, I don’t know about that God.

But I do think that God, in some shape or form, simply is.

I think God is my constant questioning, my joyous and heartbreaking existence, my resilience, the love that I give and receive, and the joy that I find in it all.

That’s what I think God is. I can neither defend nor explain my position.

And even if my pleasure and awareness and gratitude of that pleasure turns out to only be the result of a few nerves, synapses, and chemicals. I am okay with that. These experiences, this joy, this beautiful machine of the mind still remains sacred.

I will just start saying grace and give thanks to dopamine after every meal.
Email Post
Labels: authenticity consciousness Faith God pleasure sacred spiritual atheism